Funny how you search for the answer to problems and then find it when you're not looking isn't it? I wanted to get the answer to painting the 1/24th scale faces with more character so went back to my old life and searched the web sites for character make up. I should heed my own warnings to others though and write down what I'm looking for and not allow myself to get sidetracked with 'oh that looks interesting' resulting in a search for fascinating snippets of information non of which are relevant to what I was looking for.
However this time I found a make up artist called Lars Carlsson, a Swedish artist of the old and new schools. There I found the solution and it's something I already knew in the past and had not thought of it for years....and I mean Years! It's a colour which I have on my pallet already but never thought to use 'there' and wow the difference it makes. What is it? Sorry that's a secret until my class at IGMA 2011.
Here's Miss Havisham, would be wonderful to see her decaying wedding cake in this scale 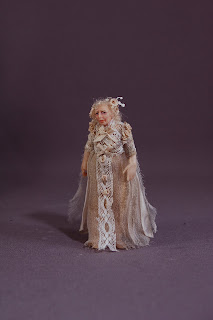 Kensington is coming up as Charlotte has just reminded us all this morning, thank you Charlotte I now have the image of dozens of makers going into a tail spin with all that work still to do. Experience should tell us all that it'll be fine but non of us ever believe that do we?
I'm feeling quite calm really much to my surprise added on to the fact that I've given up smoking and it's now three weeks. No I can't taste food any better, haven't got any more energy than I had and, yes, I've become slightly snappy at moments, but friends know that's always been there, so all in all nothing has changed except that I've got more time and that's the bonus. It's given me time to have some fun with figures. A good friend of mine, Arley Berryhill, was chatting on email just before Halloween and was saying about how popular witches are in America and had I ever done them. Now Arley does larger scale figures, sorry, fabulous larger scale figures, but he's intrigued by our scale and he suggest that I should do a witch getting dressed at her dressing table. Well we all like a challenge don't we? I had real fun doing this one.... 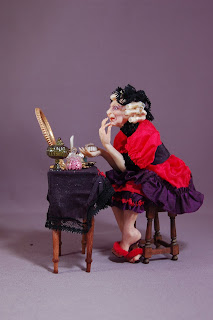 She's called 'Every Witch Deserves Warts' she's had to buy hers because she can't seem to grow enough of her own.

But go to Arley's web site to be amazed at what he does. www.arleyberryhill.com and say Hi from me.

Posted by jamie carrington at 05:11 5 comments:

And here's the current state of play with the web site. Poor Gary is probably pulling his hair out over it but I think he's solved the problem. Turns out the host ( I think that's the group who deal with my username) have become unreliable and I've now signed my life away to another - better - one. Everybody keep their fingers crossed. You never know this could just work.
Posted by jamie carrington at 11:02 1 comment:

Don't you just laugh at that title? The intention is to write a monthly blog but I've got no one around to tell me when it's due. When I wrote for Dollshouse Magazine, Christiane, the editor, got so used to having to remind that it was due.......the night before! But the intention is there, let's see what happens.

It's been 'one of those months'. Happens everyso often but I've no memory of how I coped with it last time and have to re learn.....or ask friends. Thank goodness for friends, they can get their own back at me for running their lives.

First of all I had to plan for the two workshops. One in Norway and then, almost straight after, one in Holland before planning for the IGMA Show in Teaneck. Well, things were going pretty well apart from the fact that my small workshop got covered in piles of stuff for each one and the usual happened, chaos, so it all had to get sorted. Just when it did we heard news that the airlines may go on strike. Fine, it wouldn't effect my getting to Norway but then I realised I'd never be able to get back in time for Holland. Well, we all knew that it wouldn't - probably- occur but it wasn't worth the risk and we decided to cancel, such a pity. I was so looking forward to the Sunday class where I'd volunteered to teach some of the school children I'd met last year. Wonderful teaching young people because they have such free spirits and I learn do much from them.

Then there was Holland. Trees's husband is seriously ill so would it happen? Fortunatly it is so I could get organised for that and I had an extra week to do it in. But things were just not feeling right and then I had the breakthrough. Get my workshop and flat cleaned up and sorted! It's the last thing I ever think of and the best thing to do. First of all the flat, because I had so much to do I'd not been putting things away and then couldn't find anything. First rule of clearing up is to get some plastic sacks and start throwing things away. Wierd! Just how many tee shirts does a man need and how many of them are wearable. It's my Mother in the back of my mind telling me that 'I could cut them all up and use them for dusters'. HAH! They've gone! Strange that, I've found room on shelves I never knew I had. Even stranger, having tidied up I found that putting things away when I've used them really works. I know where things are and I can find them next time.

Doesn't work in the workshop though, all dollmakers know that. We use so many different things that we create chaos just doing the first thing. But it does work on the notice board down there. You know the sort I mean, the one covered in inches of 'useful' notes and reminders. Had to brace myself for this but I found most of them were quite irrelevant and well past their sell by date so they either got dumped or put in the file drawer, the drawer I can finally get to because I'd also cleared the space in front of it. Having got a clear notice board I could print out two year planners, one for the end of this year and one for the whole of next year. Wow, I know where I am and what is booked. Better still I can see what space I have in between. Wish I'd thought of this ages ago!

Then there's the website. Seems like the hosts have changed their way of working and my pictures keep vanishing. Gary, my wonderful computer guy, tried to work it out for me and, for a time it worked. New pictures were taken, loaded up and put on showing what I'd got for Teaneck......then they all dissapeared again. Gary, thank goodness has taken over hosting it, and by next Wednesday it should be all hunky dory. I'm putting Gary up for an award, he's the only computer person who, when he's tried talking geek language at me, realises that I've no idea what he's talking about and tells me again, in simple 'press this and then do this' language. I'm sure it makes him feel very superior but he doesn't show it.

Now all I have to do is have some fun, forgot that's what life is all about. There's an evening of Rodgers and Hammerstein on the Proms tonight and I'll know all the words plus chicken salad and fruit for supper. Wow, life is good!
Posted by jamie carrington at 05:04 1 comment:

Well, it's taken years to get round to this scale but I've finally got round to it and, do you know, it's such fun to do.
Many years ago Wendy Chalkey, who used to sell 1/24th scale porcelain figures asked me if I'd sculpt a series of character figures for her so that she could cast them and make more realistic men and women than she had in stock. Aprehensive at first I finally got used to the smaller size and loved it. Wendy moved on to other things but I've kept those initial sculptures in a drawer waiting for the time to 'get on with them'.
The time seems right, with more people moving over to the smaller scale - the collections are getting bigger but the space to put them is getting smaller - and the structures, furniture and accessories are getting more available, and very good they are too. But where are the figures?
What's put me off for years is the dressing 'I'll never be able to get my big hands around the tiny bodies' fine for those that were given tiny fingers. Projecting on the fact that 'I'd never be able to do it and I'd be hopeless at it anyway' I took myself in hand and had a go. And do you know it's real fun to do? So much for projecting eh?
Here are the first ones of The Canterbury Tales. 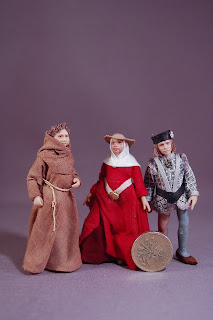 They are The Friar, The Wife of Bath and the Knight. The tallest one is The Friar at three inches high.

So, pleased with the thought that dressing them was, after all, possible and having learned from a mass of mistakes - allways the best way - I crept back late into the workshop to see if it was at all possible to do a Vicorian figure, yes a lady in a draped bustle! Let's not run before we can work eh? And here she is...... 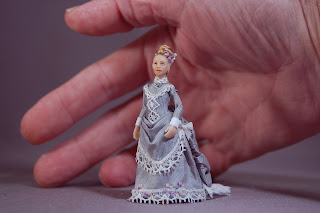 I can't wait to teach these and have put a proposal up for 2011 at The Guild School in Castine. Now I wait and see if I've got it right.

Posted by jamie carrington at 06:49 6 comments:

jamie carrington
Jamie Carrington is a one twelfth and, now a one twentyfourth scale doll maker who's been awarded the IGMA Fellowship An experienced teacher and writer, Jamie also has a range of workshop videos on sculpting and costuming one twelfth scale dolls. Follow the blog for workshop details